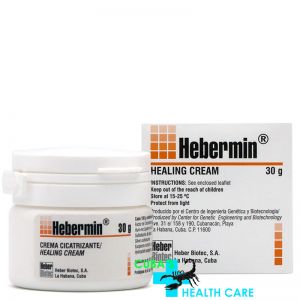 Hebermin (Facdermin) Healing Cream is a well-known and very popular treatment of the cutaneous lesions, incl. injuries caused by exposition to superficial radiation.

Shipping to Mexico, Argentina, and Brazil may take up to 2 months. Orders arrive in these countries within 7-9 days, but then they can spend for several weeks at customs without clearance, and be transferred to the customer only after 5-7 weeks.

As of October 1, 2022 shipping to Sweden is subject to an additional USD 25 tax charged on each package by the carrier. This amount will be added to the total of your order.

Hebermin is an innovative medical cream for external application. Hebermin healing cream was developed by Heber Biotec S.A. (Havana, Cuba), clinically tested in Cuba and around the world.

Hebermin is the first and foremost effective drug with bactericidal, wound-healing, anti-microbial effect. It stimulates the healing of wounds of various origins. Hebermin® cream has shown great results when treating dermatitis from radiation therapy, including with trophic ulcers, cold burns. Hebermin is indispensable tool for burn injuries treatment, because Hebermin accelerates skin scarring, maintains the elasticity of skin, and increases the epithelialization.

As producer Heber Biotec S.A. says, "Hebermin is indicated for the burns and scars treatment, achieving a considerable reduction of the cicatrization time, in superficial and profound dermic burns. In hypodermic burns, Hebermin also shortens the time of evolution upon achieving an area of granulation of better quality that facilitates the reception of the graft. Hebermin is very useful in the ulcer treatment by extravasation of cytostatics and by circulatory insufficiency, and in the prophylaxis of injuries caused by superficial radiation therapy."

Hebermin cream is a white homogenous mass with a slightly detected smell. As of today Hebermin is a unique solution with no direct analogue available. It is produced at only one factory in the whole world, located in Havana, Republic of Cuba. Heber Biotec S.A. Hebermin comes in two versions. First is Hebermin, pack 30 g and second is Hebermin, pack 200 g.

Hebermin is a cicatrizant healing cream that has a high effectiveness in treatment of cutaneous lesions, because its fundamental component which is the FCEh peptide, peptide of 53 amino acids that activate the ability of human cells to regenerate and restore their lost properties. Cream application gently accelerates scarring of tissues and restoration of elasticity. Peptides promote the body to engage its own regenerative functions.

As active components Hebermin contains EGF and Silver. EGF is a gene of human epidermal growth factor, so organism perceives the drug as a natural source of new skin cells. Silver has a wide spectrum of antimicrobial action. It is effective against gram-positive and gram-negative bacteria, Candida fungus, and Dermatophytes.

The hydrophilic base of Hebermin provides a mild dehydrating effect, reduces skin pain, creates and maintains the necessary therapeutic concentration of the active ingredients in the injured area of skin.

The drug has also a cosmetic effect, it makes scars more aesthetic due to the normalization of orientation and aging collagen fibers, and prevents pathological scarring.

Pharmaco-kinetic studies have proved that when the solution was applied on burn surface, wound intact skin, no penetration of the drug into the systemic circulation has taken place.

Doctors note a good tolerance of the drug. Clinical trials found no serious side effects. Allergic reactions were observed rarely, which are standard for solutions containing sulfonamide component and silver. Allergy manifests as a slight burning sensation, feeling of contraction, but after applying cream and bandaging, discomfort disappears in 10-15 minutes.

Hebermin can be applied at all stages of the wound healing process.

First apply the standard debridement with antiseptic solutions in case of wound infection.

After drying the wound surface, apply there 1-2mm layer of cream.

a) For the closed (or wet) method of treatment, cover it with sterile gauze or occlusive coating (healing in a moist environment). For weak superficial burns (I-II degree) and some deep (III degree) burns, it is possible to use atraumatic mesh wound covering. For the wet method, as well as in case of pronounced exudation one daily application is recommended. In case of moderate or scanty exudation cream application could be performed 1 time in 2 days.

In case of sticking to the wound, and in order to prevent undesirable drying of the wound surface it is recommended to moisturize the wipes, superimposed on top of the cream, by sterile 0.9% sodium chloride solution or some other medical antiseptic solution.

b) For the open (without bandaging) method of treatment cream should be applied 1-3 times per day.

Before new cream application, wound should be cleaned with sterile 0.9% sodium chloride solution or some other medical antiseptic solution. The procedure should be carried out carefully, in order to avoid injury of new-formed granulation tissues and growing epithelium.

If the open treatment method is used, then it is necessary to completely avoid exposure of the treated areas to direct sunlight.

Treatment should be continued until epithelialization of the wound or its readiness for a plastic closure.

c) For the prevention of radiation dermatitis 1 mm layer is applied on the irradiated skin, keeping it for 6-8 hours - then cream should be removed. Should be applied daily throughout the whole course of radiation therapy, and should not be interrupted in the event of a forced pass any of irradiation procedures.

Is Hebermin safe to use?

Hebermin cream is suitable for adults and children older than one year, for treatment of:

- superficial and deep skin burns of varying degrees;
- trophic ulcers (including, but not limited to, chronic venous insufficiency, endarteritis obliterans, diabetes, erysipelas);
- pressure ulcers;
- nonhealing wounds (including stump wounds, wounds during autodermoplasty in areas between lysis and got accustomed skin, residual wounds at the donor skin areas);
- violations integrity of the skin in case of injuries, surgical and cosmetic interventions;
- frostbite;
- ulcers developing with the introduction of cytotoxic drugs;
- the treatment and prevention of radiation dermatitis, including superficial radiotherapy.

Incompatibilities or interactions with other medicines were not found. No cases of overdose were observed.

- hypersensitivity to sulfonamides, silver and other ingredients of Hebermin;
- children under the age of 1 year;
- the drug should not be used on areas with active neoplastic lesions and to stimulate the scarring in the areas of surgical excision.

The drug was well tolerated. In rare cases may appear:

- allergic reactions, typical of sulfa drugs and preparations containing silver;
- the appearance of a burning sensation, pain, contractions and discomfort in the area of cream application (usually disappear on their own in 5-10 minutes after applying).

Use during pregnancy and lactation

Hebermin has not been sufficiently studied about the effects on fetus or infant, so its use is not recommended during pregnancy and during lactation.

Use with caution in congenital deficiency of glucose-6-phosphate dehydrogenase, liver failure and kidney failure. For open method of treatment you should avoid exposure of treated areas to direct sunlight.

In case of prolonged treatment of burned wounds with Hebermin, sulfonamides plasma levels may increases. And this in return leads to nausea, vomiting, stool discomfort, painful joint sensitivity, headaches, as well as kidney and liver damage, limb cramps, and disinhibition of consciousness. Signs of an overdose are eliminated with symptom relieving drugs. In case of overdose, a large amount of liquid should be used, daily dialysis should not fall below 1200 ml.

Interaction with other drugs

Cream should not be assigned together with wound cleanse enzymatic solutions.

Accelerates skin scarring, maintains the elasticity of skin, and increases the epithelialization

Provides a mild dehydrating effect, reduces skin pain, creates and maintains the necessary therapeutic concentration of the active ingredients in the injured area of the skin

Has a cosmetic effect, provides scar aesthetics due to the normalization of orientation and aging collagen fibers, and prevents pathological scarring